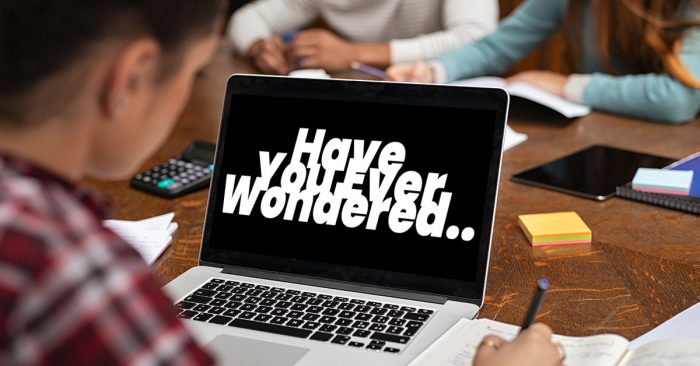 Anyone who has had a four to seven year old has heard the questions. “Why is the sky blue?”, “Why is the grass green?”, “Why do I have to take a nap?”. The questions may change, but our curiosity doesn’t diminish. As we get older there are still things we may wonder about. Here are a few.

Have you ever wondered…

Why some people are afraid of heights?

Most people attribute fears to either previous behaviors (like falling from a high place) or evolution (an innate fear of things that can be dangerous.)

How far the moon is from the Earth?

At its closest, the earth and the moon get within about 226,000 miles of each other. That number can be better visualized when you realize it equates to about 100 trips between New York City and Los Angeles.

Why they are called “Bachelor’s” degrees?

It is generally accepted the term comes from the French word ‘bacheler’ that translate into “apprentice knight”. It is the starting point of knighthood.

What the “new car” smell is?

We tend to romanticize the new car smell as being something special but it is actually just the combination of new interior materials like plastics, cloths and leather-like materials. If you want to cheat there are new car fragrances available in air fresheners.

Why some people prefer mountains over beaches?

There have been studies that say those who love mountains tend to be more introverted than those who appreciate the beach. Beaches also tend to be warmer so it may be as simple as that. Both offer fresh, rejuvenating ionized air.

Why taller men are more attractive to women?

This may come down to confidence. Women are attracted to confident men and taller men tend to be more confident. This can give credence to why some shorter men exude extra confidence to better compete.

How fast the Earth is turning?

It can be shocking to realize that even those who are standing still on the equator are traveling about 1,000 miles per hour as the world turns. That doesn’t include the speed we travel around the sun. Getting dizzy yet?

Who is more likely to die each year, a policeman or fireman?

Have you ever wondered if you are over-paying for auto, home or life insurance? We can help. Contact us for a no charge, no obligation quote today. Mystery solved!

Pros and Cons of Having a Family Business

The Most Compelling Reason to Get Life Insurance

Tips for Buying a Backyard Play Set for Your Kids

8 Tips to Market Your Small Business on the Cheap

Staying Healthier: A Home Gym in the Space of a Closet

Why Now is a Good Time to Compare Car Insurance Rates

Preventing Yourself From Becoming Insurance Poor

Pros and Cons of Having a Family Business

The Most Compelling Reason to Get Life Insurance