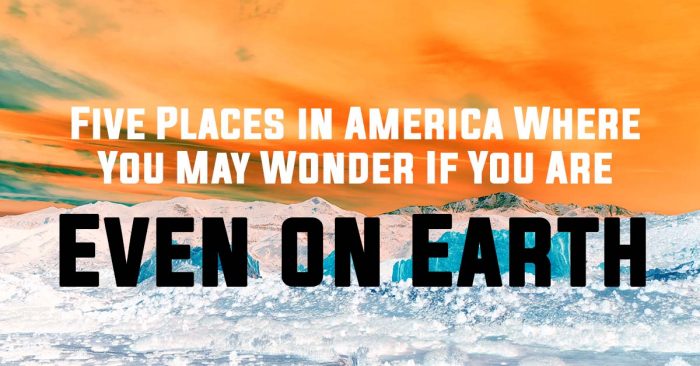 There are places in the United States, most of which you can actually drive to, that appear to be not of this planet. Places so stunning, so unusual you will be compelled to stand in wonder and amazement. These are places where you may even feel rejuvenated, reconnected and uplifted. Sure Washington DC is impressive and Niagara Falls beautiful. But these five places are so amazing, you may feel like you have traveled to a distant planet. Here are five places right here in America, where you may feel like you are not even on Earth anymore.

The native Lakota people called this area of South Dakota “Mako Sica” or “Bad Lands” because of its inhospitable terrain, lack of water and difficult climate. A drive through what is now Badlands National Park is impressive, inspiring and almost a bit unbelievable. If it weren’t for the cars, people, roads and occasional signage it is not difficult to imagine you have been transported elsewhere in the universe.

While it may seem Las Vegas is on another planet, travel east of the city into Arizona to take in Grand Canyon National Park. There are simply so many ways to experience this natural wonder you may not know where to begin. View it from a helicopter, horse or mule or take a hike. Travel down the river at its depths or stand on its edge. It is awesome and amazing, and it can have you questioning just what planet you are on.

The National Parks of Utah

Take your pick. Zion National Park, Arches National Park, Capitol Reef National Park, Bryce Canyon or Canyonlands National Park will have you recalling scenes from some of your favorite sci-fi movies. Perhaps because so many at least were partially filmed here. Between standing in awe, taking photos and posting to social media, time will just fly when you experience these natural wonders. It is no wonder they are known as “The Mighty 5.”

While most of Yellowstone National Park lies in Wyoming, it also reaches into Montana and even into Idaho. It is easy to understand why it became our first National Park, with its mountains, waterfalls, and natural beauty. But a visit to the geyser region with its bubbling sulfur pits may have you believing you are no longer on Earth. The strong smell of sulfur and steaming pits may make you think you have traveled elsewhere. Even Old Faithful, a tourist hotspot, is still impressive if you can imagine it without its signs, fencing and dozens deep crowds.

Alaska is the least visited state in the country and the people there like it that way. There is no question it is hard to get from one place to another and the winter temperatures are brutal. Since it was once part of Russia even many of this state’s cities have names that sound like they are from another planet.

The real beauty of these places is that every experience is unique, and no single photo can capture the essence of them. Need a vacation? Try some of these unworldly destinations right here in the USA.

Car Production Facts Which You May Not Know

When Pizza and Beer Isn’t Enough

Saints, Forts and Presidents, Why Our Cities are Named What They Are.

The Hot Dog: Everything You Could Want to Know. …and More.

There’s Power in Asking for Help

What Grandparents Should Understand About Their Children and Grandchildren

Car Production Facts Which You May Not Know

When Pizza and Beer Isn’t Enough

Saints, Forts and Presidents, Why Our Cities are Named What They Are.